SOUTH AFRICA (SIWEL) —The Federal section MAK/ANAVAD in South Africa has just learned with great sadness and dismay the tragic death of Dr. Kamaleddine Fekhar, a human rights and democracy activist for mozabite people’s
This death comes after several weeks of abusive and arbitrary detention under unsustainable and inhumane conditions from Algeria gangsters state.

The Federal section MAK/ANAVAD in South Africa has never stopped denouncing and condemning these serious human rights violations, which informs us of the dictatorial nature of the decision-makers in that apartheid country called Algeria .

The MAK/ANAVAD in South Africa demands justice and truth and that all the light is shed on the circumstances of this death the rapport to be send to Union Africa .

The MAK / ANAVAD federation in South Africa demands the immediate release of other prisoners of conscience who are illegally and despicably languishing in death jails and the worst impediments to human dignity.

The MAK/ANAVAD in South Africa requires real decision-makers in that apartheid country called Algeria to quickly take appeasement measures including the immediate release of opinion prisoners in order to prevent the country from getting bogged down in chaotic scenarios.and more stateless over the country.

The MAK / ANAVAD in South Africa reaffirms its unwavering support for the families of these prisoners of conscience and its active solidarity with the family of the late Dr. Kamaleddine Fekhar. 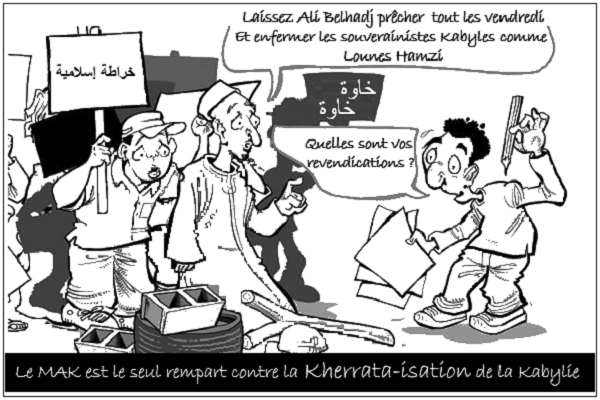