Conforming to the foundational texts of the UN, as the President of the Anavad (Provisional Government of Kabylia) and in the name of Kabylia, I have the distinguished honour to address this memorandum to you to ask for the formal recognition of the right of the Kabyle people to their self-determination.

The Anavad considers that the Kabyle people now fulfil all the necessary conditions for exercising its right to a decide its own future through a referendum.

Kabylia deserves to join the United Nations and to take up its place as a nation and as a free and independent state. The time has come for it to dissolve the political bands that have attached it to Algeria by force since 1857. These ties, which have always been tense, marked by reciprocal distrust, and at times very violent, are really chains that Kabylia has always struggled against, and intends to break free from for the wellbeing of its children as much as for regional stability.

The Kabyle people are nearly 12 million strong and live across a territory of more than 40,000km2. Although we know that it is neither the number of inhabitants of a people, nor the size of its territory that admits it as a member of the United Nations, it is helpful to note that Kabylia, located to the east of Algiers, is larger that more than 30% of the member states of the UN and that it outweighs more than more than 60% of them in terms of population.

The reasons for this separation relate to all spheres of life. The cases contained in this memorandum add scale and gravity to this claim. Despite all the evidence justifying this plea to your excellency, the Kabyle people are ready to commit their future to the outcome of a vote, and demand the application of the international right to self-determination of all peoples.

This memorandum therefore appeals to your attachment to the cause of the liberty of peoples, your impartiality and sense of responsibility, to express your position and that of the UN on the validity of the Kabyle demand to recognize their right amongst all the other peoples of the world.

It equally calls for the support of the international community, so that justice will be done to Kabylia, and that an end can be put to the denial of its existence which dates from the loss of a military battle against the French colonial troops, on the 24/06/1857 at Icerriden (Icheridène).

The present approaches of the Anavad to the United Nations, African Union, European Union, Arab League, Association of Southeast Asian Nations, Commonwealth of Independent States, USA, France and the OAS (Organization of American States) is neither a coincidence or an unconsidered act. It is the logical culmination of the historical process of a nation that has never resigned itself to a definitive loss of its sovereignty. Yesterday, it fought with courage against the French army (1857, 1871, and 1954-62). Today, it staunchly confronts the Algerian dictatorship that attacks its language and its identity through a policy of Arabization and of depersonalization, since 1962.

As Kabylia is only treated as a very serious threat to the country’s unity, Algeria has never ceased to treat it as an enemy, subjecting it to war, repression, insecurity, economic sabotage and denied existence.

Because of this hostile, almost bellicose, attitude, Algeria has put Kabylia back more than 50 years in its general development. It’s an unforgivable crime.

However, the Algerian state, the extension and clone of French colonialism, only ended up producing in Kabylia the opposite of what it had counted on: resistance rather than submission, the reinforcement of its personality rather than its assimilation. Its secularism has risen even more in the face of the “salafisation” that the regime seeks to implant within it by all means: at the very moment that the free world struggles with all its might against Islamism, Algeria officially encourages it on Kabyle land through the schools, the justice system, the administration, the media, the financing of aggressive islamist associations, even by the nomination of “repented” Islamist terrorists as Imams in the Kabyle villages.

This memorandum is therefore the fruit of the daily struggles of a people who, after defeating French colonialism at the price of innumerable sacrifices that count among the most heroic of the last century, have confronted the hateful and destructive assaults of Algerian colonialism since 1962.

One of the objectives of the present initiative is also to fully inform the international institutions on the policy of oppression, repression and discrimination practiced by Algeria in Kabylia towards its identity, language, culture, economy, environment, administration and security.

The will for Kabylia’s independence is not due to an accidental or fleeting dream of liberty; it constitutes a permanent and irrefutable part of its personality and its culture, since the dawn of time.

Kabylia has stood throughout history just as the Tellian Atlas on which it stands. Neither denial of its existence, nor oppression, repression and human rights violations, nor the economic sabotage and insecurity inflicted on it by the Algerian colonial power can achieve their ends.

Kabylia is convinced of its strong and legitimate right to live free and proud, to sit amongst the nations of the Earth and to bring to Humanity its contribution to peace-building and international prosperity.

Therefore, it is very important to underline that in keeping with the values of the Kabyle people, this enterprise wants to be peaceful above all else; Kabylia is situated at the crossroads of civilizations that have flourished around the Mediterranean basin, and remains the land of the olive tree, symbol of peace and prosperity.

So, although all oppressed peoples pursuing their quest for freedom are may legitimately resort to violence, as Kabylia knows well, it remains resolutely peaceful. It refuses to take up armed struggle and the impermissible shedding of blood to claim its right to life. It dares to hope, with your support, to so inaugurate a new era for all oppressed people, in which the inevitable geopolitical shakeups inscribed in the logic of History will happen peacefully, through negotiation, justice and international arbitration, far from the violence that until now has ravaged the continents.

Still, if it has opted for pacifism, this is neither by weakness nor by a lack of courage to take up arms but due to civilizational values. The Kabyles are valiant warriors; the Turks and the French encountered their bravery when coming up against them in their vain and unceasing attempts to submit the Kabyle land from the 16th to the 19th centuries for the former and from 1830 to 1962 for the latter.

To this physical violence, that it rejects but does not fear at all, Kabylia opposes moral force, right and the confrontation of ideas. Even in a state of legitimate self-defense such as during the Black Spring (2001-2003) where, unarmed, young Kabyles met the explosive bullets of the criminal Algerian gendarmes with bare chests, 130 of them dying and thousands being wounded including more than 1200 disabled for life, Kabylia preferred to look these killers right in the eyes and cancel out their barbary with this hard-hitting phrase: “You cannot kill us, we are already dead!”.

We don’t fear death or any enemy. We just want to live out our independence in peace, the respect of our values, being good neighbors’ and engaging in international cooperation and communication with all the peoples of the world.

Weapons and their violence are the sign of peoples driven to desperation by opposition to their demand and legitimate dream of independence. A people whose cries of distress are ignored by the international community will end up sooner or later taking their affirmation into their own hands.

I hope that Kabylia, with your support, will never reach this desperate threshold but will come to a situation of peace in this part of the world.

In formally recognising the right to self-determination of the Kabyle people, you open the way to the resolution of many other armed conflicts in its wake, whether current or latent, in Africa or in Asia.

If some think that peace, so dear to all peoples, will be forever on the horizon, an ideal, that needs to be worked at, many pitfalls lie along the way.

A new process of more organized geopolitical evolution, better controlled by the international community will be set in motion for the benefit of all humanity.

Strong in its resolve to serve the cause of peace, liberty and prosperity for the benefit of all humanity, the Kabyle people present you with this request for self-determination based on the following texts;

1) The United Nations Charter, Article 1, Paragraph 2, which aims “to develop friendly relations among nations based on respect for the principal of equal rights and self-determination of peoples, and to take other appropriate measures to strengthen universal peace”

“1. All peoples have the right of self-determination. By virtue of that right they freely determine their political status and freely pursue their economic, social and cultural development.

3) Article 3 of the UN Declaration on the Rights of Indigenous Peoples which states: “Indigenous peoples have the right to self-determination. By virtue of that right they freely determine their political status and freely pursue their economic, social and cultural development”

4) All Articles of the Universal Declaration on Human Rights, Algeria’s abuses of which have spared no sphere of life of the Kabyle people, starting with the right to life and to security.

Excellency, Secretary General of the UN

Knowing your devotion to the cause of peace and liberty in the world and your respect for the fundamental texts of the UN, confident in the response that you will give it to affirm their right to self-determination and its choice of the peaceful path, the Kabyle people offer you their thanks and ask you to accept their warm greetings, believing in their profound hope for independence. 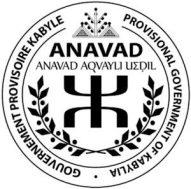 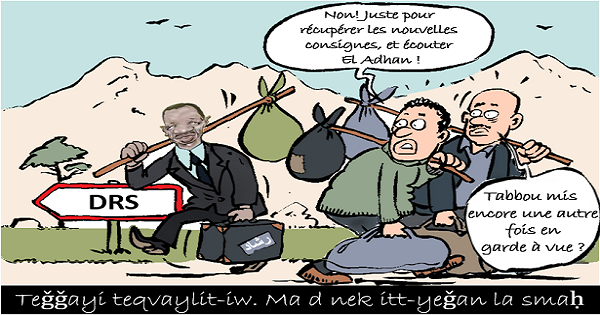